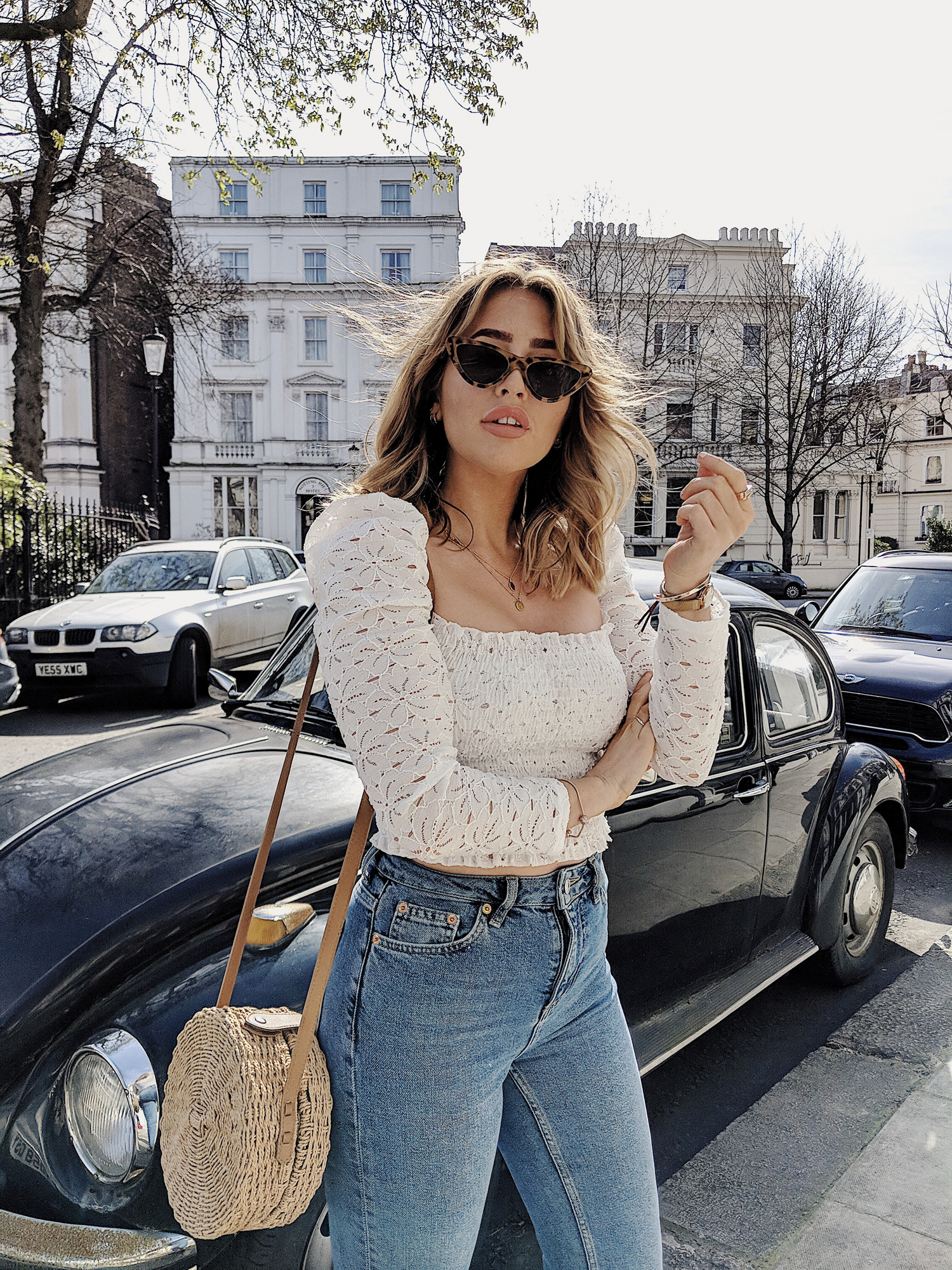 Remember when the short, snappy Instagram caption was the thing? It was the “cool girl” equivalent of the social mediasphere. The shorter, wittier, and snappier the caption, the more lolz you were. But things have certainly changed. More and more influencers and social media figures are using their captions to really say something – essentially, microblogging – myself included. And this may not be true for everyone, but I have an inkling that it definitely can help boost your engagement as well as create a stronger, more loyal audience who really feel they know the person on their phone screens. 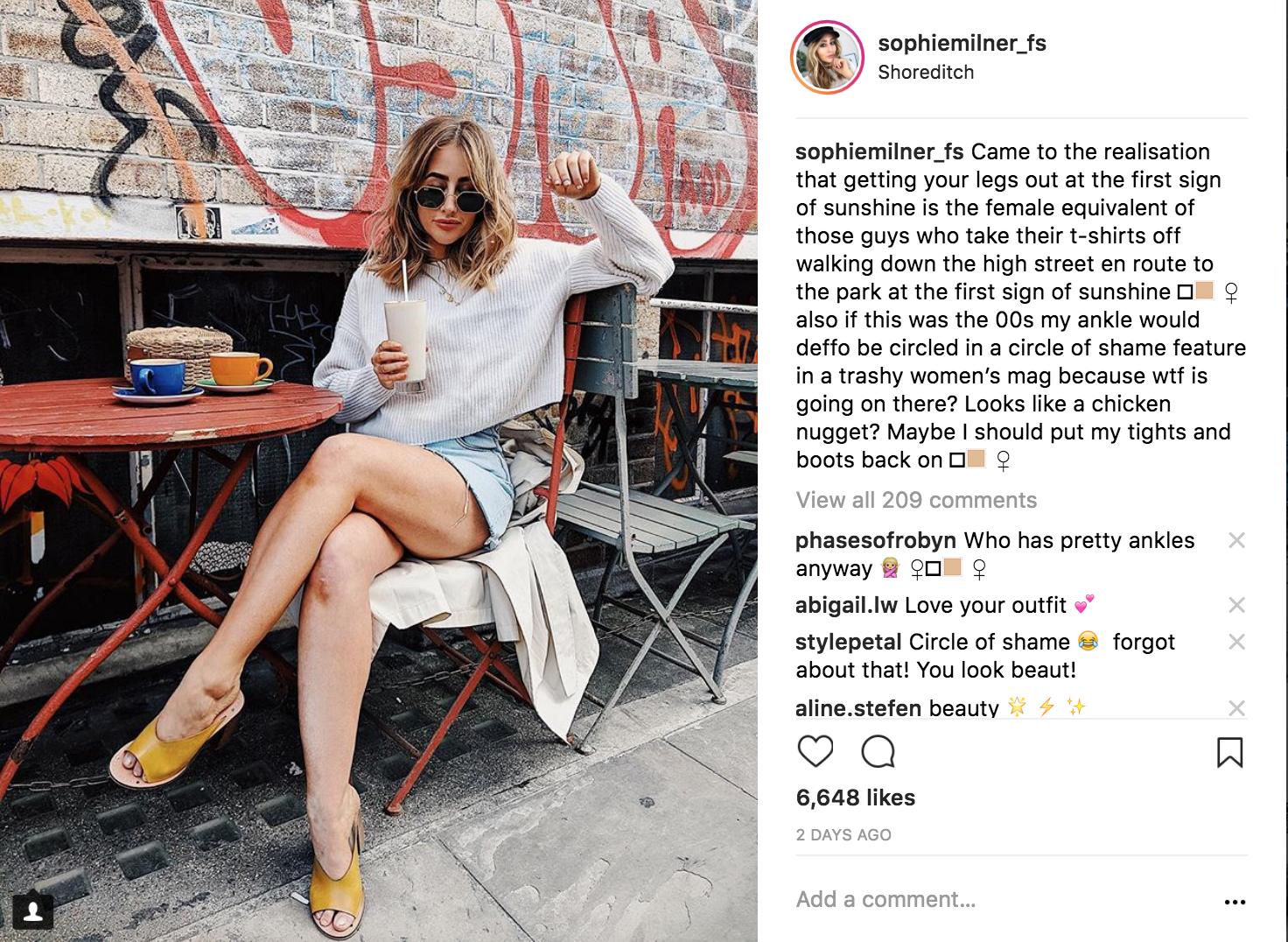 I remember the first time I saw an influencer really go in on a caption. It was Imogen, aka, Imogenation. Now this girl is fab, and she has personality by the bucket load. But truthfully, when I first saw her post a super lengthy caption alongside and Instagram photo I thought “Are you ok hun? This is like, social media suicide or something” – but wrong wrong wrong I was. One of Imogen’s most valuable traits to her audience is her voice, and the stories she tells with it. And a story she did tell with that caption – it had me hooked. She has such a loyal audience, and she uses that caption space to tell a story when the time feels right. Plus I literally love the girl. She’s a total sweetheart. 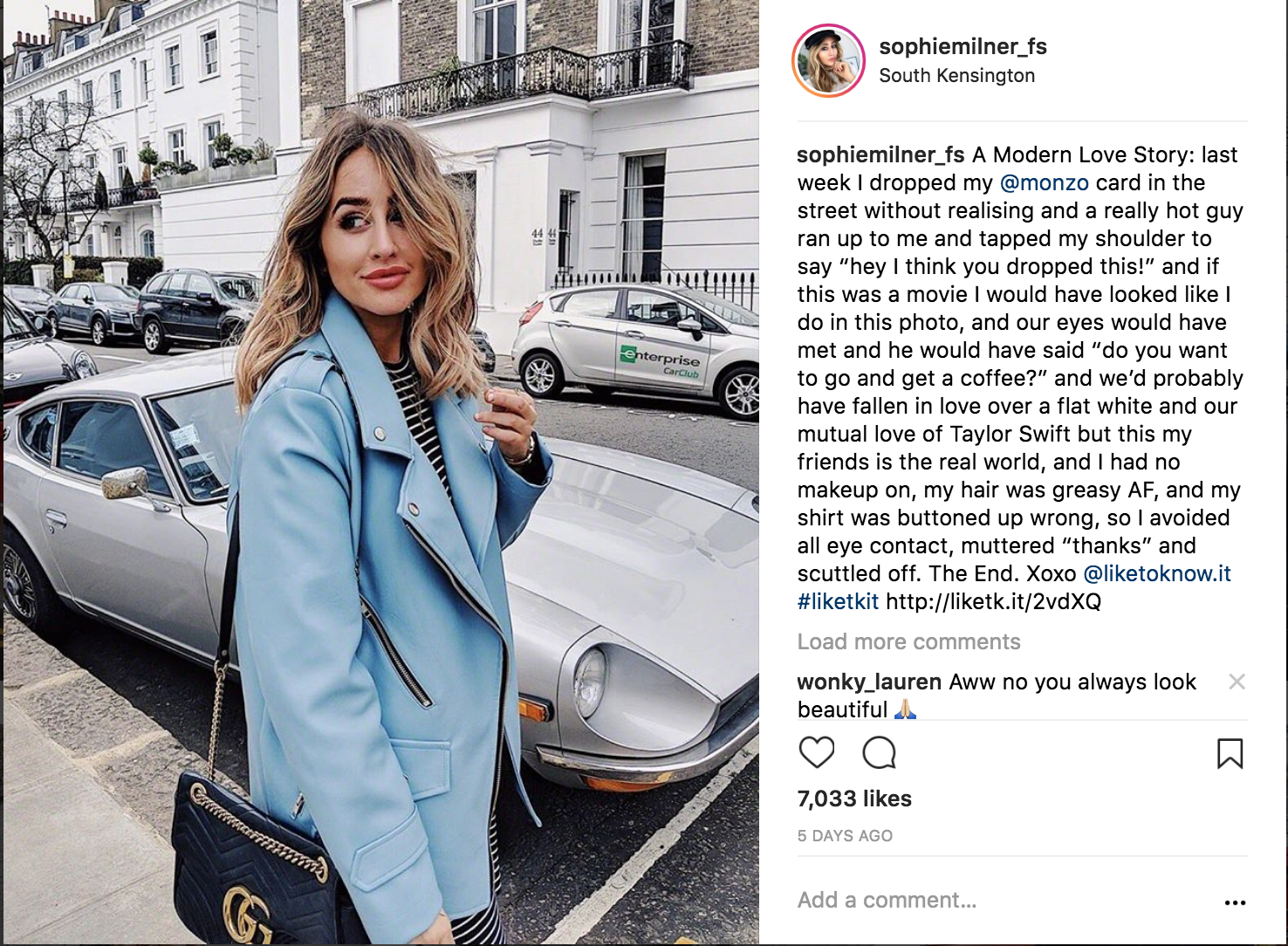 They say a picture speaks a thousand words, but they aren’t always the words you’re trying to translate. And when Instagram is booming, and there’s so so many pictures to look at, you’re not always guaranteed to stand out. There’s a lot of conversation about whether Instagram is killing off blogs – especially fashion ones – because followers can get the content so much quicker and easier on Instagram, and get it from all of their favourite influencers through one app. We’re all, quite frankly, becoming greedier for more. We are all much faster content consumers than ever before, whilst having less and less time to sit, click elsewhere, and actually read. So unless you’ve got something juicy to offer your audience, I definitely feel you’re in danger of losing them a little, or struggling to grow them, to the more time-friendly, on-the-go, all-encompassing world of the ‘gram. 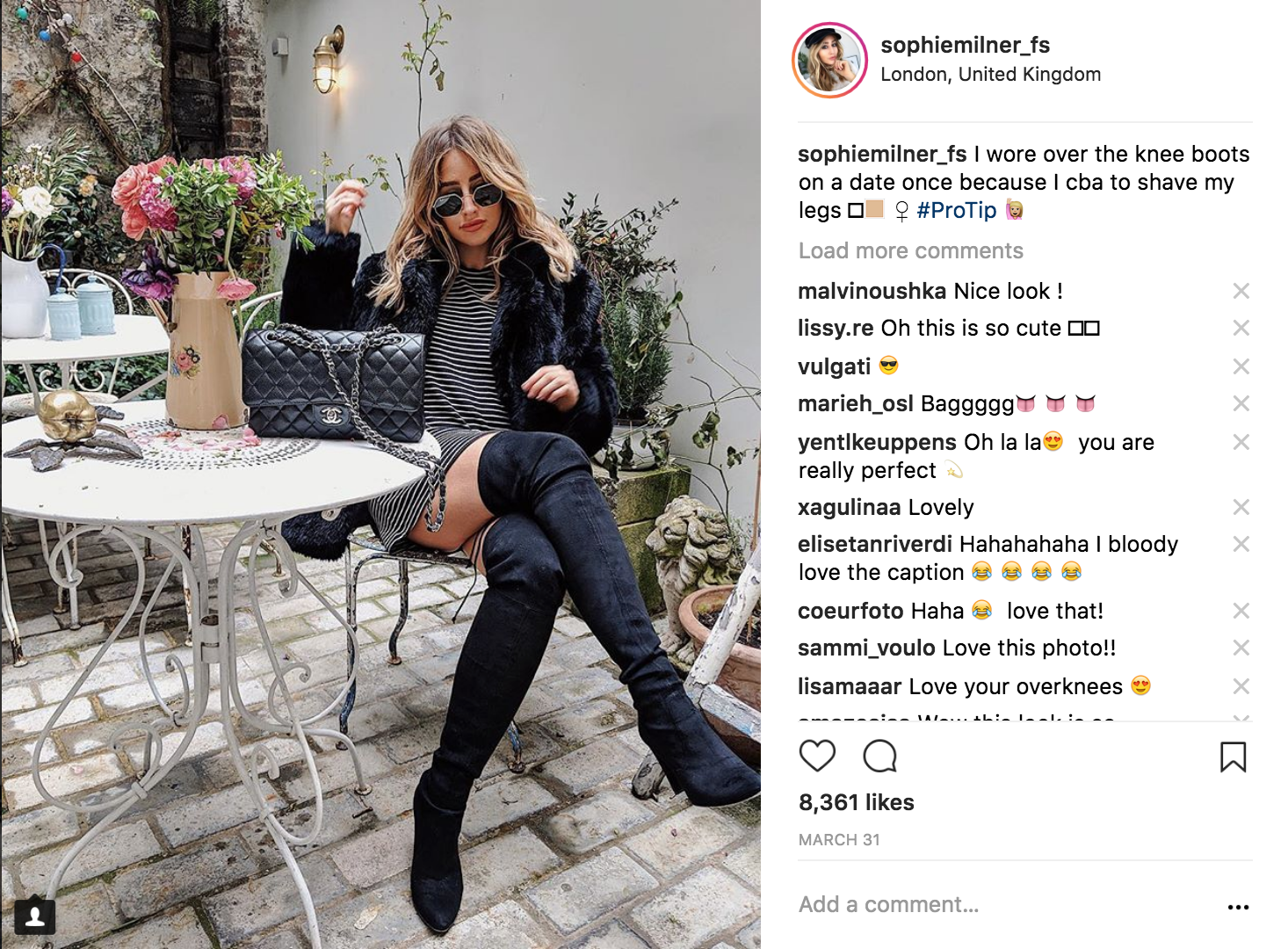 When it comes to your voice, you need to use it rather than lose it – no matter how visually focused Instagram is. Lengthier captions that give more of your personality or tell a bit of a story perfectly bridge the gap between blogging and just being an Instagrammer (a topic I covered not so long ago that you can read here (add hyperlink to http://sophiemilner.co.uk/2018/01/my-honest-thoughts-on-becoming.html/ ) – something I am totally struggling with morally, but I’m trying to make work for me) It’s essentially Microblogging. 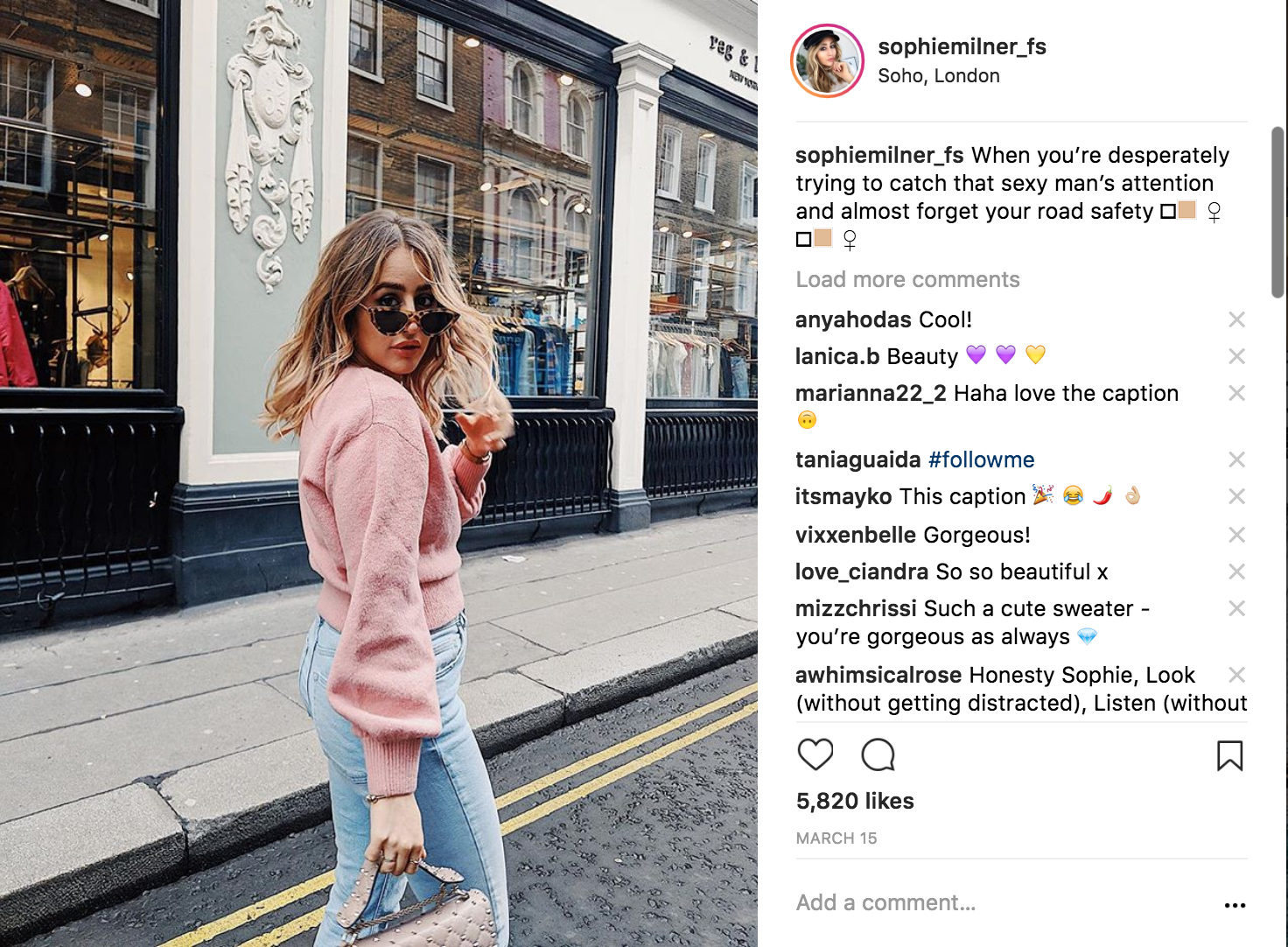 It doesn’t matter if it’s totally unrelated to the image, just use it. For example, if I don’t have anything funny to say about a photo then sometimes I’ll tell a story about what happened when taking the photo, or even just telling my followers what I’ve been up to that day, or what I’m planning on doing that night. Don’t underestimate how powerful it is – when I meet followers IRL they’ll often say how much they love my captions and they’re so conversational it’s as though they’re getting a text from one of their best mates. And that’s the thing – it’s all about creating that connection with your audience.

But there is one problem. The honest truth is: people aren’t always going to read it. At all. The majority of my comments on a photo – regardless of whether the caption is funny, a little update on my life, or telling a bit of a story – are often about the outfit. Probably 60-70% will say “cute jacket!” etc, etc. But it’s the same with any blog post I write. I use fashion imagery to accompany lifestyle blogposts on relatable topics women want to hear about – but I will still always get someone commenting “omg your outfit is so so amazing babe *insert their blog link here* ” – and you know they haven’t even read my v deep and meaningful blog post, they’ve just looked at the photos and gone straight to the comments section to leave their own link in the hope they get pageviews (I see you who do this – and sorry, but I’m marking your comment as spam) but in a highly visual app, like Instagram, it’s totally expected. So it doesn’t bother me quite as much when it happens there.

But don’t let that put you off using your captions wisely. Just because someone doesn’t comment or like the image doesn’t mean it hasn’t reached them and helped spark an emotion within them. I’ve had friends mention to me that theyv’e found my captions funny, but they never ever ever comment on the photos. So you’ve got to consider all of those who do see but don’t visibly react. Although, if anything, I believe a highly engaging caption makes people so much more likely to comment!

A word of warning for you, however:  don’t go overboard with it. Yes, it’s important to show your personality, but make sure it is yours. There’s a lot of discussion right now about the whole #relatable issue, with people writing the most faux-relatable things just to try and seem like they’re more human than Instagram social media celebrity robot thing. People can sense the bullshit, and it’s just as important to remain authentic in delivery, or doing all these captions is going to have the complete opposite effect that you want.

It’s about being memorable, standing out from an oversaturated market, and using your voice and personality to create a stronger connection with your audience.

I have always been intimidated by cool people. Always. As soon as I figured out what cool was – and simultaneously, that I was most…

Over the past 2 years of Fashion Slaves’ existence, the photography has grown from awkwardly posed pictures of my outfit taken against a door with…

Crying in public is never fun. Have you ever seen anyone do it? Apart from in the women’s toilets in a club on Friday night,…