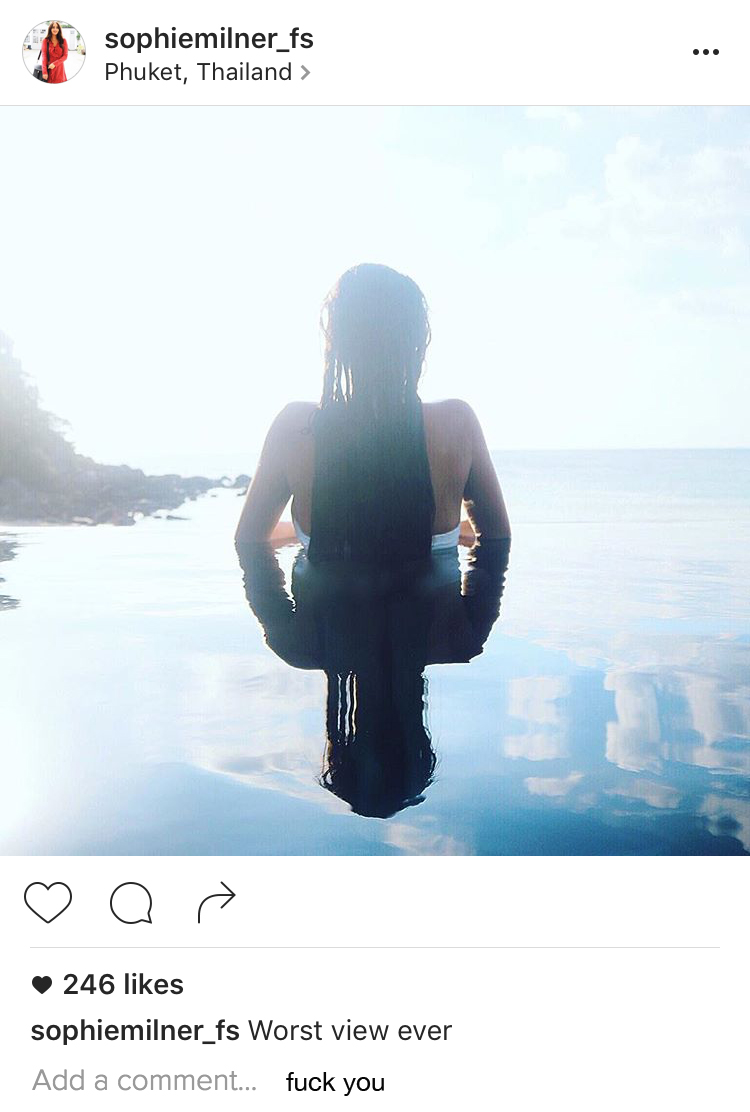 The humblebrag is old news. Since before #IWokeUpLikeThis went from irritating hashtag to T-shirt-worthy slogan, only to be captured in a highly facetuned selfie, humblebrags have been rife on social media like an infestation of Kardashians. But still, they are prevalent, and as annoying as ever, and it has my head spinning trying to work out why people still don’t understand how vomit-inducingly irritating they are.

For total clarification, let’s look at a quick definition (I also like number 2 on Urban Dictionary)


Humblebrag: bragging masked as a complaint, and/ or faux-humility, as a form of self-promotion.


Definition nailed, let’s get some RL examples involved. A quick scroll on the Instagram, Facebook, and Twitter of my most notoriously humblebraggy online acquaintances and I’ve neatly selected three prime examples for your (dis)pleasure:

So bored of people asking if my hair is extensions – accompanied by photo of swooshy Rapunzel locks.

Average view tbh – accompanied with photograph of what I can only assume is the scenes from this person’s five star private villa in the Maldives.
Social media has created the perfect canvas for self promotion; it already acts as a magnifying glass for our most exciting life events whilst acting as a muffler for our least pleasant ones. And as someone who has a blog, I know more than anyone its role in acting as a loudspeaker for all that’s good compared to all that’s bad. But it seems that the line between using the platform to share updates about our lives and using it for all-out boasting has been blurred by veiling it all in faux-modesty. What used to read as a straightforward yet earnest display of pride “Can’t believe I won this award!” has been replaced with a seemingly sly caption of “holding up trophies is a real tough workout.”

What’s so amusing about it all is that it has the absolute opposite of the desired effect. A Harvard paper looking at five studies, aptly named Humblebragging, a distinct – and ineffective – self-presentation strategy, highlighted just so. It found that those who outright complained or full-on bragged on social media were actually viewed as more likeable and sincere than those who humblebragged, and that it’s actually ineffective in conveying the specific trait that person is actually trying to promote. The bottom line reads like this: despite people’s belief that combining bragging and complaining results in effective self-promotion strategies, humblebragging fails to pay off.

And possibly more problematic is this: “Humblebraggers experience the positive effect from bragging and the positive feeling that they are not actually bragging, while recipients react negatively to both the self-promotion and the attempt to mask it.”

So there you have it. Your humblebrag about how much it sucks that you’re on holiday sipping mimosas whilst your colleagues have their standard midweek meeting just makes you look ridiculously insincere. And there’s something a little sad about that. As an optimist, I like to think that not everyone on the internet is a mean-spirited idiot, green with envy over others success, or a shameless self-promoter. And I for one want to be happy for others achievements and joyous moments. But the big wins of my internet compadres becomes somewhat harder to stomach when it’s captioned with a fake complaint that only serves as a grossly ironic highlight about how fabulous their life really is. It won’t make people feel happy for you, it’s more likely to illicit others screenshotting your post, sending it to a group Whatsapp, with you the target of some very snark comments. Great, if you think that you’re nobody until you’ve been talked about. But aren’t we a little bit better than that?

So perhaps,we should ditch the humblebrag in form of a proper brag-brag, because, according to the study at least, we’ll be viewed as more sincere in doing so?

Just say it how it is. Stop with all of the faux-modesty.

It’s awesome if you saved some sick children in India, helped an old lady cross the road, you won £1mil on the lottery, got a promotion, looked really hot on Saturday night, saved some abandoned puppies, and your boyfriend told you that you’re great in bed. Just say it how it is.

Can you hear that? It’s the toot toot toot of your own horn blowing.

Putting partying behind us, we headed over to Koh Lanta, a far more relaxed area of Thailand in comparison to the mentality of Koh Phi…

“please.don’t.judge.me” Hi! It’s so nice to meet you! I’m Sophie. I like cats. And cheese. I really enjoy shopping for clothes. The 1975 are my…

If my obsession with cropped flare jeans has so far gone unnoticed, it’s about time I remind you. Recently I spent an entire…