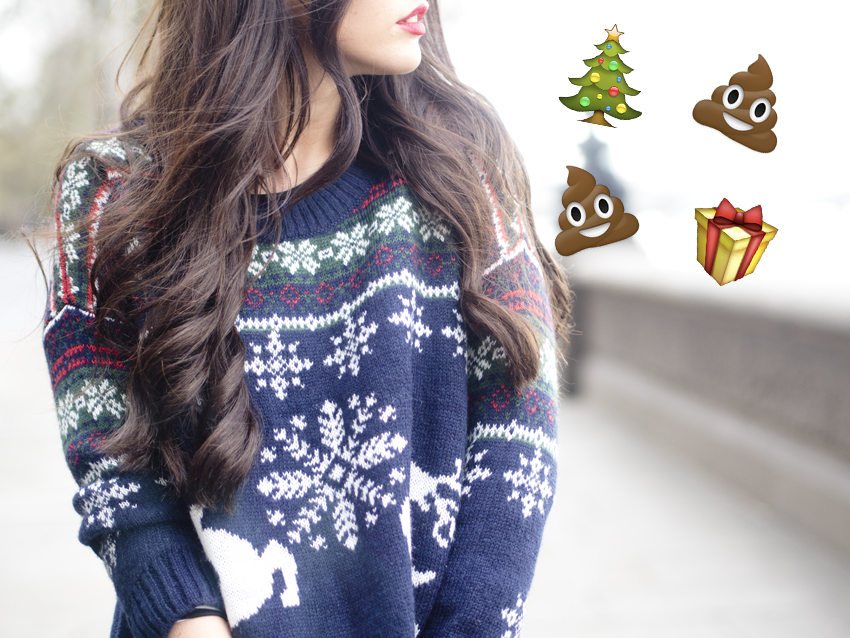 Tis the
season to be jolly! Right? Well, not necessarily. Whilst the festive season may
look all tinsel-laden, glitter-coated, and lit up with sparkling lights, for
some people that’s simply not the case. The Samaritans helpline told BBC’s
Newsbeat that they responded to a shocking 200,000
calls for help during the festive season last year – and that’s just the tip
of the iceberg: just think of all of the people struggling who felt too afraid,
embarrassed, or ashamed to make the call. So the reality? For some,
Christmas really is The Most Wonderful Time of the Year (and you’ll probably find the topic of this post a bit strange.) But for others, the cheap tinsel simply itches (and nobody likes a rash), the glitter gets in a whole lot of weird places
nobody really wants to get glitter, and the glare from the twinkling lights is
sometimes too much that not even a pair of jet black supersized Celine
sunglasses can shade you from it.
But why do
some people feel this way? Whilst I completely confess that I love the
rosy, cosy, mulled-wine induced build up to Christmas (this year it’s been
party after party, and I finally feel as though I’ve got my social life back) when
the 25th December and week following up until January hits, the days
seem to merge into one gloomy blur of numbness and nothingness. It’s hard to stay motivated to do anything. And it all just feels well… a bit weird. Which in itself is weird because it’s Christmas! I should be happy! And smiling and eating and giving presents and eating some more and taking selfies with my family and putting it all over Facebook! Before I actually took the
liberty of googling “why the hell do I feel so crap on Christmas day when I
should be having fun like everyone else,” I thought that I was the only person
who year on year felt this way, but it turns out that a kind of Christmas
depression is a thing, and then I saw Martha from Martha Jane Music’s post on it and realised more people feel this way than I had imagined. I’m not a Scrooge, even the over-commercialisation
of Christmas doesn’t bother me in the slightest, and when we started playing
Christmas songs in the office I was the first person singing along and pissing
off all of my colleagues. I‘m a very happy and positive person all year round and I don’t suffer from depression, so I’ve found it unexplainable why I seem to plummeting into a pit of
misery at this specific time when everyone else seems to be having a yuletide love-in. To put it
simply: who the fuck stole my Christmas spirit? (Grinch… I’m looking at you)

You can’t
go anywhere from mid-November – okay, the beginning of November – without being
bombarded with imagery of the perfect Christmas. Smiling families that all look freakishly, unnaturally good-looking – even the Grandad looks like an ex-James Bond star. The kind of
Pinterest-worthy food that would definitely hit up a billion likes on Instagram.
The most utterly glamorous outfits worn by the most utterly glamorous people who are out having the most fab-u-lous time ever at some seriously glitzy party. But this only serves to
give us an unrealistic expectation of what Christmas will, and should be
like. We’re not stupid. We know this isn’t reality. But at the same time, when year on year it makes up 99% of the representations of Christmas we see in the media, it’s hard to not think to ourselves that our Christmas should reflect the
images that we see. So when your old Aunt Sal turns up and tells you you’ve put
on weight, or you burn the turkey, or that sparkly Christmas dress makes you look more Kerry Katona than Kim Kardashian, you can’t help but feel disappointed.
Another
thing that doesn’t help is nostalgia making things blurry. When you think of
Christmas, what do you really think of? It pulls me back to my childhood, when
I would stay awake all night trying to hear Santa deliver my presents and
eventually after annoying my parents enough, my sister and I would tear open
all of our gifts and spend the day playing with exciting new toys. Christmas as
a kid was the best. Now it’s just a
day where the only places open to go are a few crap pubs filled with equally miserable people, and unfortunately I don’t
have 10 new barbies to play with to keep me entertained. Thanks mum and dad,
for setting the bar so bloody high that everything pails in comparison! (only joking love you really)… It’s easy to fall into the trap of looking back and expecting things to be as good as they were, but the truth is that the excitement goes as soon as you stop being a child (or you wake up and see Santa hasn’t eaten the mince pie and really begin to question his actual existence.)

All of these issues can lead to a hell of a lot of pressure to have the most amazing time, so when our Christmasses just don’t look how we think they should, we’re left disappointed to chow down on that dry turkey under the judgemental gaze of Aunt Sal. Brill. It’s anticlimactic, at best, with an epic build up of fun partying, coming to a less-than impressive finish that doesn’t meet our unrealistic standards, or as we fear, anyone else’s.

The Vicious Cycle of Guilt

What comes on top of the media bombardment of The Best Christmas Ever and everyone’s carefully curated clips posted all over social media is the feeling of “Christmas is supposed to be a joyous time so why am I not having fun!?”

When you’re looking at someone’s family selfie with a turkey posted on Facebook and it looks like them and the whole world is having a better time, it’s easy to think “Why can’t that be me?” or “Why is everyone else so much happier than I am?” The message we get is that Christmas is supposed to be the happiest time of the year – everyone and everything is telling us this – but some of us are spending it feeling terrible, and it makes us feel out of place and illegitimate in our feelings. We feel that without an obvious reason to not enjoy Christmas – like losing a loved one, being clinically depressed, having serious financial issues – we have no right to feel these negative emotions. We appear to have everything that we want and need, so if we were to feel unhappy it would be ungrateful. Then, we feel guilty about it, thus driving us into a bit of a vicious cycle of guilt.

Then of course, battling these cripplingly negative emotions whilst trying to portray a veneer of complete happiness and fictitious joy because it is Christmas doesn’t exactly help either.

The holidays can be a truly poignant time as it signals the last week of the year, and that leads to a lot of self reflection on the past year. Cue a mental onslaught of “did I do everything that I wanted? Did I achieve my goals? Did I actually resolve that problem?” which basically reads as, was I good enough?

It can bring out issues we’ve not dealt with or swept under the carpet. You get a little stuck blaming yourself for your shortcomings, and punishing yourself for not working harder, eating healthier, or simply having more fun and making better memories. This is probably one of my worst triggers for feeling shitty at Christmas as I’m very ambitious, have very high expectations for myself, and a serious perfectionist. So when I look back on the year and focus on what I didn’t manage, I find myself feeling pretty angry at myself.

Spending time with people you don’t really want to see

I love my family. We’re a small unit of four that spend most of our time together faux-bickering and exchanging a neat dose of sarcasm. What’s not to love? But not everyone has a close, tight-knit family, and are expected to meet up with people out of obligation more than choice, having to fake a level of social intimacy that simply isn’t there. Nothing’s more awkward than having to sit with people and pretend that you like them. It’s like being on a shit tinder date but a billion times worse because you can’t pretend you left the oven on and scarper because well, the oven is already on, cooking up everyone’s dinner.

So, what can you do to avoid Christmas depression?

Remember that Christmas is merely a season; it is not a personal judgement on how you have spent the past year or your achievements in life. You’re not alone, you shouldn’t feel guilty about feeling this way or a pressure to be happy simply because it’s Christmas. It’s just any other time of the year, so take a step back and take a breather, and look at it for what it really is: just another day.

And if all else fails… try this solid piece of advice. 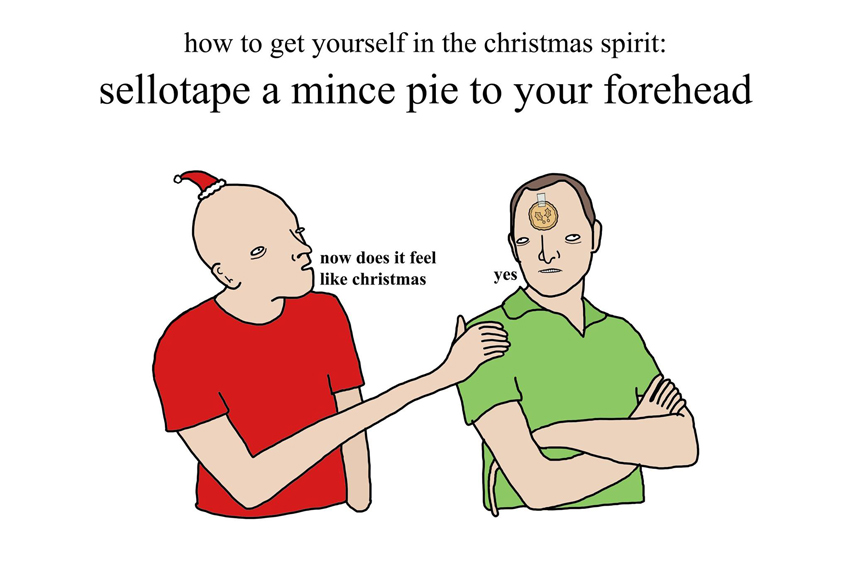 image by Chris The Simpsons Artist
Photos by Carl Thompson

Don’t worry, this isn’t a blog post trying to brainwash you into the positivity camp. Fellow pessimists, hear me out! I’d be lying to you…

It’s Sunday night – well, Tuesday morning by the time I’ll be posting – and I’ve been staring at this damn computer screen for around…

8pm, Friday Night, London – nothing says weekend like going out-out for overpriced cocktails. A quick dash into Sainsbury’s to pick up the mandatory Prosecco for…