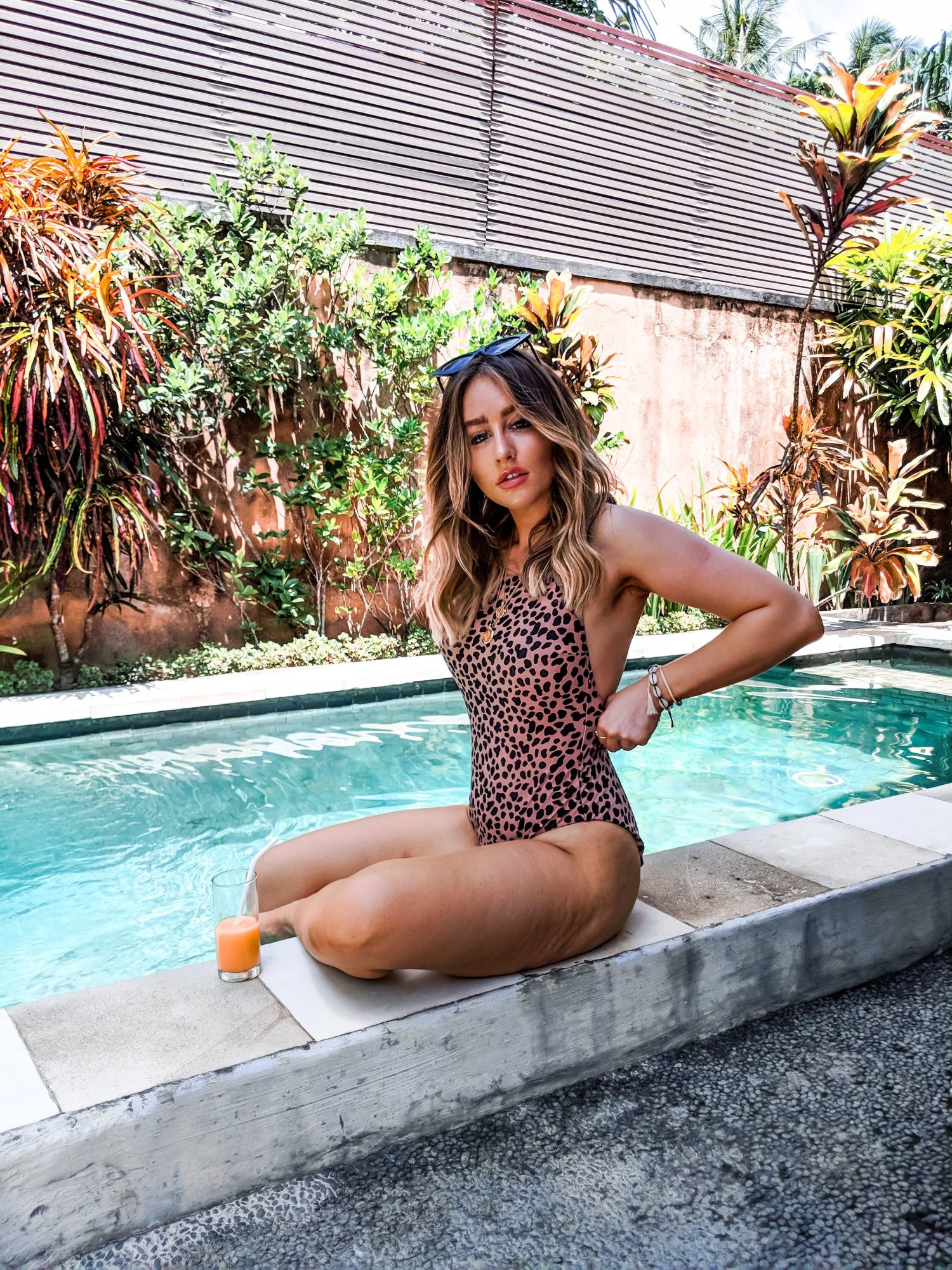 I have a habit of living in denial and pretending things don’t exist in the hope that they will just… well… just stop existing. If I don’t acknowledge it, then it doesn’t exist, right? Like the spider that’s been living in the corner of my living room ceiling for around 5 months. My ever growing monobrow. The fact my fake tan looks shit around my ankles. And my cellulite.

I’ve noticed it’s more obvious now, despite the fact I’ve got fitter and stronger and more toned. But I’ve pretended it hasn’t. As I said, if I don’t acknowledge it then it doesn’t exist. But it doe exist. And I’m learning to be fine with it.

Looking back at the complicated relationship I’ve had with my body over the years, I can’t help but recognise how my fear of other people seeing my cellulite and the way it makes me feel has stopped me from wearing certain clothes. It stopped me from training in shorts during the blistering British summer we had last year and I remained in my black leggings whilst training outdoors in the baking sunshine or in a boiling boxing gym. I’m a happy and healthy UK size 8 and I like my body, so why do I have such a problem with it? Because we’ve been ingrained to hate cellulite and treat it like an enemy alien force that must be destroyed and killed off at all costs. 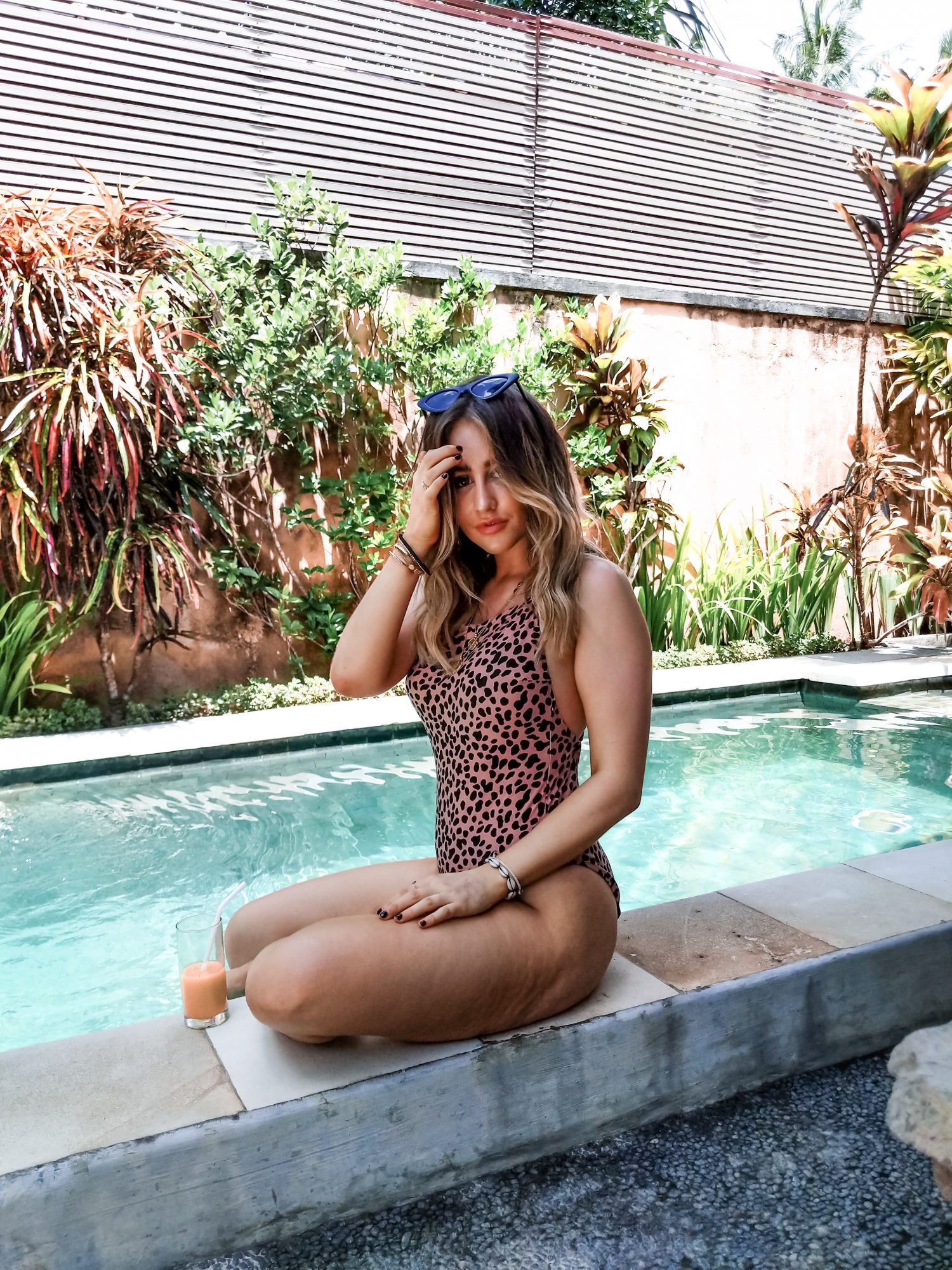 Think of all the products we see that promise to get rid of it. The magazines that up until pretty recently would have features with the circle of shame pointing it out on celebrities. It’s a combination of “LOOK! This celeb is just like us and has cellulite too” mixed with “how disgusting and shameful is it that this person has cellulite!” Just the other day I was handed a cheap shit rag magazine which costs like 90p or something, dated back from January, whilst getting my nails done. It featured “50 celebrity bodies from best to worst!” Oh wow wow wow. I’ve been living in my liberal, self-accepting snowflake bubble so long I forgot that sort of bile designed to make women hate themselves still existed.

It is such a toxic message. “Cellulite is wrong” But what even is it? Fuck, I genuinely just googled “what is cellulite” to get a professional scientific answer and the first page spews results on how to get rid of it, as opposed to an actual definition. See, this is the fucking problem.

“Cellulite is caused by fibrous tethers that run through your fat and pull on the fascia that lies underneath your skin, creating a dimpled appearance, meaning that it’s not just fat accumulation, but rather the structure of the fat, that causes it.”

But hear this. 80-90% of women have cellulite. It is a totally normal thing. And the reason we think we shouldn’t have it is because it’s repeatedly airbrushed out of images so we never fucking see it anywhere. The images we DO see rarely feature cellulite simply normalised – it’s circled in red in magazine pages or splashed over the Mail Online’s sidebar of shame in an ATTRACTIVE CELEB FLAUNTS WOULD-BE-SEXY CURVES ON BEACH, IF NOT FOR CELLULITE article, or conversely, it is shown in full-force as a message of self-love and acceptance to all. It skews our perception on what’s normal. I urge you to watch James Smith’s IG video on it. 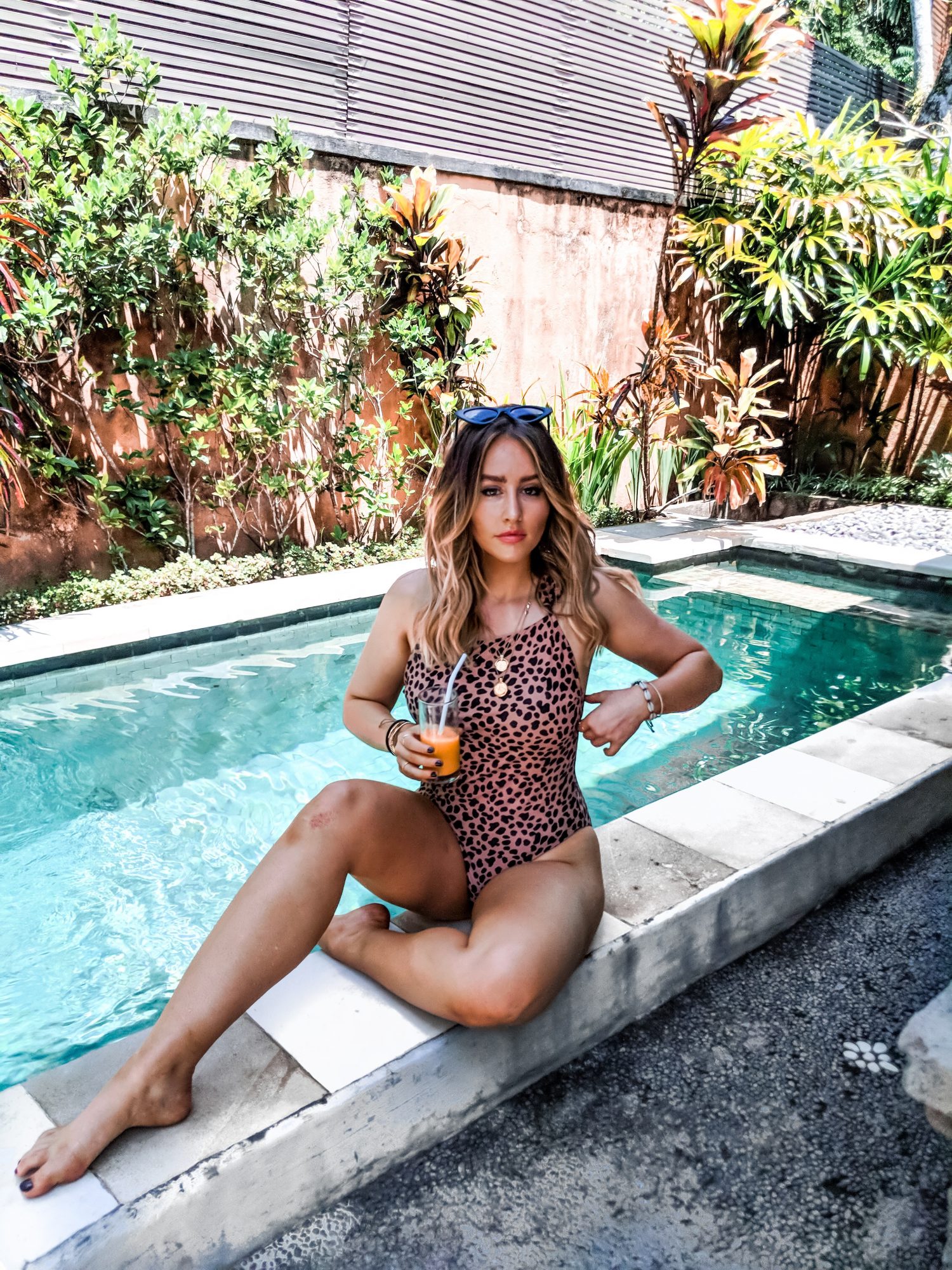 Have I edited out the cellulite on my skin before? Yes, a long time ago, but I stopped editing my body in images some time ago because it just isn’t right. And have I not posted a photo because my cellulite was visible in it? Yes, I did that only the other week. Even though I loved the photo, it didn’t make me feel good to see my cellulite so I posted a different image instead. Because it’s been ingrained in my head that it’s not normal, that it is ugly.

But on holiday in Bali I took some killer shots on the beach holding a surfboard. But my cellulite was visible on the back of my legs – just slightly, but it was there. I had 3 choices – don’t post it. Edit it out and then post it. Or post it as it is (well, with my presets) and talk about it in the caption just a little bit. I chose option 3. A few days later I shot the photos I’ve used in this blog and you could clearly see my cellulite when I was sitting down by the pool. In general, my cellulite could be a lot more visible, and it looks more pronounced when I’m sitting down like in these pictures (and like in most women) but who cares? It’s literally not a big deal. In some lighting it looks non-existent. In other lighting it looks incredibly obvious. But when it came to these photos, cellulite or not, I thought they looked great. So I just posted it without any reference to the cellulite at all in the caption, and after, I had so many messages come in about how refreshing it was to see someone just get on with it and slay no matter what.

I also received a message from a brand that makes a cellulite remover asking if I wanted to collaborate to help remove my cellulite using their products. A big fat fucking no to you. Shame on them for preying on an assumed insecurity and tap into my (sometimes) impressionable and (hopefully trusting) audience. Slickly-marketed branding in hues of rose, greys and white and a starter kit priced at £199. Save your money. 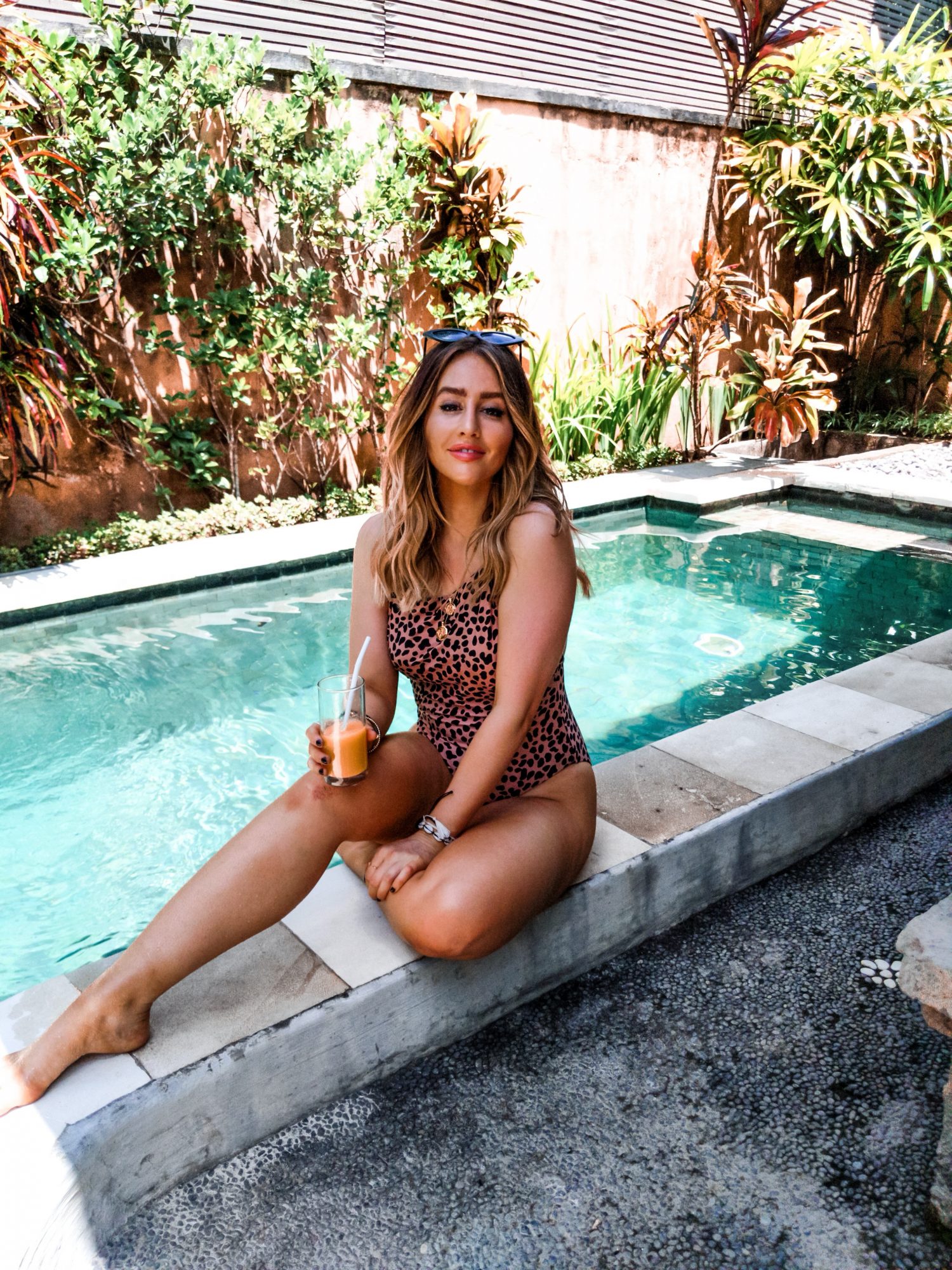 I want magazines and influencers and advertisers to stop editing out this kind of thing. And I know as a woman with plenty of insecurities, it’s hard to not fall into the pressure of wanting to look perfect online. If you take a photo where your cellulite is visible and you are not ok with it, just don’t post it. But I want people to be ok with it. Because it is fucking normal!

The messages I received from people after posting these images just went to prove how important it is for every day women to see cellulite normalised – not blown up and made a big deal over (ok ok I know I’m making a big deal of it right now but stay with me) but simply just appearing in images just as it appears in our own lives every single day – in the summer when we’re in skirts and shorts, at the gym, in the changing rooms, or in the mirror. I never stare and think “oh wow, cellulite” when I see it on someone in the street, as basically every woman I see has some degree of it. It’s just normal. I don’t look twice. But when we see it online it’s a big deal and revolutionary because we NEVER see it. It hardly exists on our social media feeds, and we’re so used to perfected images. We seem to have embraced stretch marks, so why are we still so afraid of showing our cellulite? There needs to be a big cultural shift in this.

Being brutally honest, I would like my cellulite to be less pronounced. I’m only human, and the media messages around us that we’ve soaked up for years telling us how wrong and ugly it is will take some time to unpick and write over with new messages. But there is still no miracle product that is scientifically proven to really drastically change the structure of your fat – if there was one that worked as well as all of these other ones promise to, we’d all be on it right now.  I exercise 4-5 time a week and drink plenty of water, but striving to get rid of something that 80-90% of us have seems like an unreachable goal. But what is more reachable, and will be far better for me in the long run, is to stop focusing my attention on it and learning to just get over it. To challenge those who say it’s ugly and unsightly. And to no longer let myself feel less for having it.

(Swimsuit is by Rixo)

This post could easily have been titled: “and here’s another reason why Sex and the City gave me unrealistic expectations of what my glamorous city…

“Oh my god. That girl has so many followers on Instagram. I don’t know why though? Her hair isn’t even nice. She’s not even that…