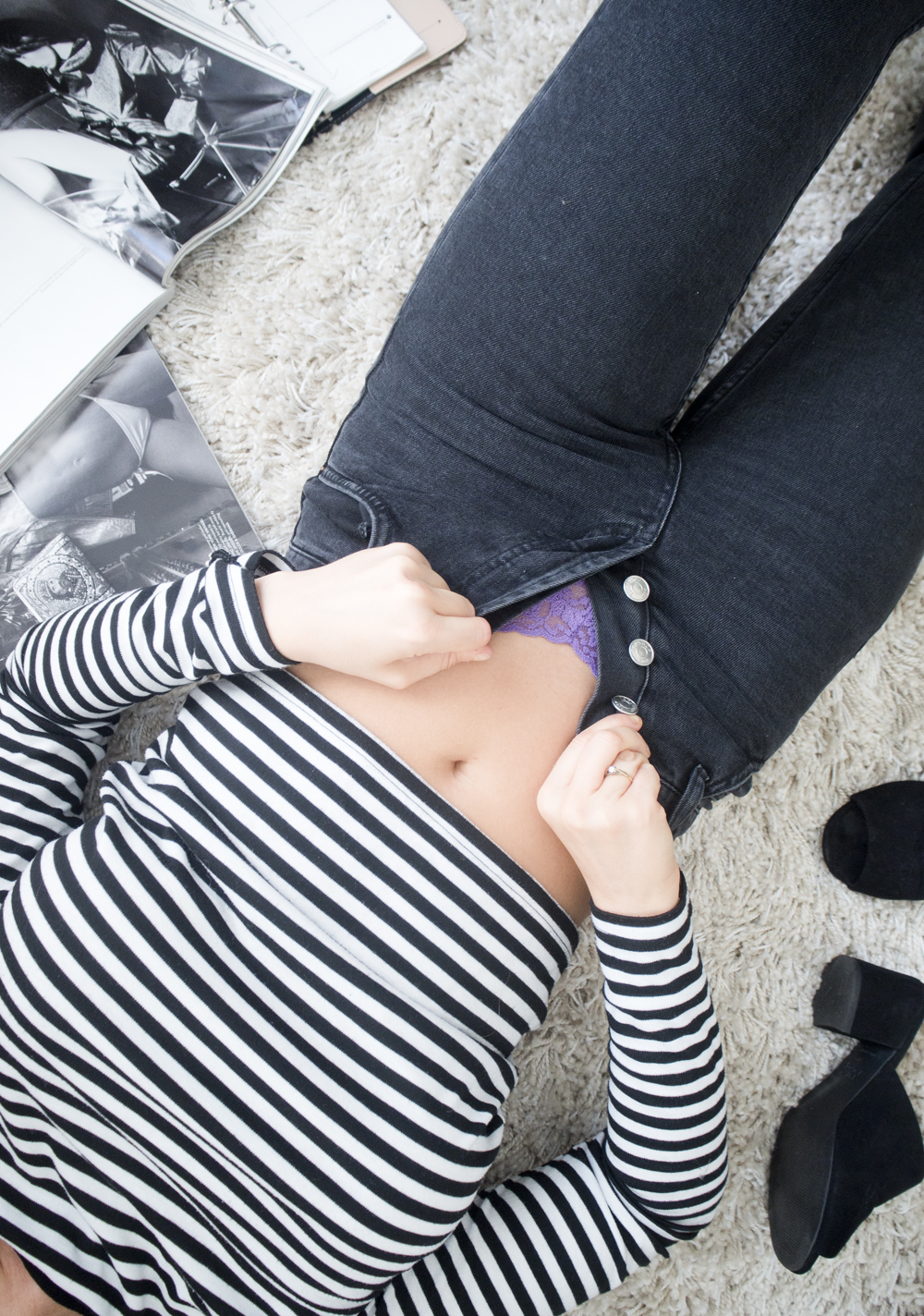 Instagram, the general media, ad campaigns, Victoria Secret models – they all get a lot of flack for setting unrealistic and unreachable body standards for women. But staring at beautiful women with incredible physiques is not always the reason why we feel so disappointed in our bodies, crushing our self esteem faster than you can nod enthusiastically to the question “would you like fries with that?” What if our issues lie closer to home?

Whilst clearing out my wardrobe the other weekend, I came across a pair of jeans that bizarrely looked a hell of a lot smaller than I remembered. Weird. So obviously, I decided to try them on. Here’s the 411 on these jeans: Topshop, straight leg, black, and they had always been a little bit tight, which is exactly why I rarely wore them. But now, this time round, I couldn’t even button them up over my stomach. (FYI, yes they are the jeans in this photo where I’m trying to lie down and do them up. And no, not even gravity can save me now) The desperate attempt to get those buttons up was like playing a wrestling match between the constricting fabric squeezing my fat like sausage meat into a skin, the extra inch or two that had appeared around my hips as if like magic, and the searing guilt I felt for apparently letting myself go. I’ll take one button! I don’t care if the other three won’t do up, just please, dear Goddesses of Vanity and Unrealistic Body Standards (they look like Victorias Secret models btw) just please give me one button and I’ll swear never to even look at a burger ever again!

No deal. These buttons were going nowhere.

It confirmed what I had been ignoring. I’ve put on a bit of weight in the past three months. Despite being totally happy with my reflection, enjoying a balanced lifestyle of fitness, eating well, and treating myself sometimes (well, more than just sometimes, apparently), all of that was replaced with an almost vomit-inducing feeling of guilt. Suddenly I hated my reflection. Suddenly I wanted to cancel dinner with friends and sell my ticket to the festival I was supposed to be going on Saturday. Suddenly I lost my appetite. Suddenly I was very very aware of the fact that I’m going to LA in a week. Suddenly I started Googling “fashionable ways to completely hide your body at the beach.” Suddenly I’m cursing J.K. Rowling for inventing an invisibility cloak that is only available in the fictional world of Harry Potter and not in my local branch of Topshop. And suddenly, my reflection no longer resembled the happy, 20-something woman with a good career, great bunch of friends, awesome family, lovely boyfriend and successful blog that was standing there all but 5 minutes ago, but a giant slab of greasy pizza shouting GIRL YOU GOT FAT!

When you’re faced with the shitty realisation that you may have let the summer get the better of you (damn you social life, with cocktails on the terrace and dining out al fresco!) you begin to question everything: those jeans were really tight, weren’t they? And I don’t think I’ve worn them since I last washed them on a really high temperature and tumble dried them and we all know that makes things shrink, right? Have the friends I’ve complimented for losing some weight actually lost weight or it it because I just got fatter? Is butter a carb? You have an almost out of body experience when you’re so disgusted that your own skin feels like a foreign object, putt under the microscope to scrutinise every tiny (or not so tiny, in this case) flaw. I feel like I finally understand what Lewis Carroll was getting at with that scene in Alice and Wonderland when she eats that cake and grows so big she hits her head on the ceiling. Instead, I’ve eaten 10 pieces of cake and now my fucking jeans don’t fit.

Instagram, the general media, ad campaigns, Victoria Secret models – they all get a lot of flack for setting unrealistic and unreachable body standards for women. Sadiq Khan recently called for adverts of a body-shaming nature (I’m talking that infamous Protein World ad) to be banned on all TFL services. But staring at beautiful women with incredible physiques is not always the reason why we feel so disappointed in our bodies, crushing our self esteem faster than you can nod enthusiastically to the question “would you like fries with that?” What if our issues lie closer to home? Within ourselves? What if it’s not always about the airbrushed models, insta-girls in bikinis, or the ad campaigns, but it’s actually the moment we realise that our bodies have changed, that we’re no longer as in shape as we used to be, and that quite frankly, we’ve let ourselves go a little?

No super-toned abs of a #cleaneating insta-goddess can ever make me feel quite as terrible as not being able to fit into my jeans – and that’s a far more problematic body-related issue to deal with than the glowing bronzed babe with 15,000 likes on her latest bikini picture that I’ve been staring at for approximately 7 minutes and 52 seconds. You can shut your eyes, ignore the campaigns, vandalise them, or turn your phone off from Instagram, because part of you can always disconnect yourself from it as you know it’s not reality. But you can’t disconnect yourself from yourself. Your slimmer self. Because that was real. You’re weighing yourself up, quite literally, with your own standards rather than someone else’s. It’s not the guilt that comes from others setting unattainable body standards, it’s the guilt that comes from letting our own personal, attainable standards slip out of our pizza-grease coated grasps.

What’s sad is that I’ve probably had the best summer in years. And all of the burgers, BBQ’s, cocktails, nights out, and parties that have contributed to putting on weight have contributed just as much to having the most joyous – and memorable – few months. Because of this, I can’t remember the last time I cried because I was actually upset over anything. The summer euphoria is so strong it’s as though I’ve been bathing in the rosy glow of a real-life Instagram filter. But those bastard jeans made me regret everything, and with the regret brought on floods of tears that could be saved only by a phonecall to my Mum. In a situation like this, there’s few things anyone can say to really make you feel better. But somehow, what she said completely worked on me.

She asked me to think of what advice I would give if a friend rang me crying about this exact same situation.

I guess I would start off by telling her to stop worrying because she looks incredible. That she is beautiful for so much more than just how she looks. Then I’d tell her all of the great things about her. Weight gain over three months is not as big of a deal as it might seem at first. As upset as she is, crying won’t solve anything. So get the tears out of her system now and then don’t cry again. She’s lost the weight before, so of course that just proves that she can definitely do it again. It’s not a race, but to enjoy the journey of getting fitter and reaching new goals. Bouncing back is as much about mentality as it is about physicality.

We are our own harshest critics: it’s time we give ourselves a bit of a break. And in a world that’s increasingly putting more and more weight on aesthetics – where we even draft our Instagram pages with the incessant planning of someone with OCD – doing so can be a steep challenge. So we’ve got to remember in this world based on likes and followers, we are still so much more than just our appearances. Or a few pounds of weight gain. Or a few selfies.

As the old saying goes, don’t judge a book by it’s cover (or in this case, a pair of ill-fitting jeans..)

Previous Post: « The Best Accessories To See You Through The New Season
Next Post: Go Big or Go Home »