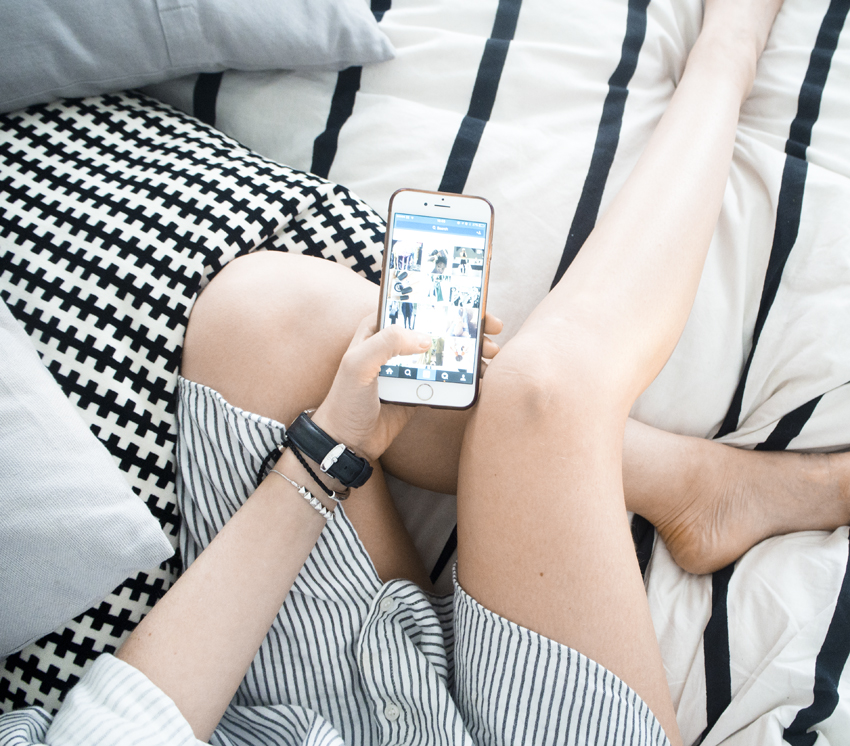 Coffee cup on reclaimed wood desk.
Sitting in bed with a magazine.
The legs on wooden floor next to a cute handbag.
Avocado on toast.
Avocado on anything!

Sound like I’m recalling Socality Barbie’s finest moments? No, just some of my – and others online – most liked shots on Instagram. We’ve all been there, some of us have done that, and honestly, most of us have liked the picture. Yet despite these now cliché images raking in the highest proportion of likes, more recently than ever I’ve found myself facing criticism from others for posting such images.

It’s so disingenuous, it’s not real, and it’s so set up. They tell me as if I have no idea about how much I meticulously planned the exact positioning of the chilli flakes *sprinkled* on my smashed avo brunch…

And all I kind of want to say back is erm, newsflash, that’s because it is set up. When blogging can mean such serious business as it does today, your Instagram profile is a landing page and portal that can either point new people to discovering your work, or send them running for the hills wondering how and why they ended up on your page. So uploading that selfie of you and your best mate on the night bus scoffing a McDonald’s may be hilarious and megalolz, but it doesn’t look that great in terms of professionalism – unless, perhaps Big Mac sauce isn’t smudged into your now less-than-perfectly contoured cheeks and you have the ability to make the harsh yellow-tinged lighting on the N137 work in your favour (if you do, please tell me your secret.)

Thanks to Essena O’Neill infamously lifting the lid so publicly on social media being fake (and to an extent, quite rightly so – she has helped to raise awareness to younger, impressionable audiences that don’t quite understand the extent of construction behind some social media accounts) there has been a wave of backlash with the transparency it has bought. And I’m beginning to feel a ripple of it in my online life. Here’s a little snippet of some of the things people have said to me recently about my pictures on Instagram:

“You arranged your food to look like that?”
“Who did you get to take that photo?”
“You edited that picture before putting it on Instagram?”
“Did you really use a self-timer to get that shot?”
” Wow how disingenuous.”

Yes, I do arrange my food for photos to make a better shot, yes I did use a self timer to get a certain image, no I don’t actually have wooden floorboards but a board I made using vinyl adhesive to get a nice clean, aesthetically pleasing background in some shots. Is it such a big deal? Some say it’s defeating the point of Instagram being instantaneous snapshots, but the whole platform and way we utilise it has changed – we’ve just been adapting along with it. When you’re no longer showing yourself online as an individual but a personal brand (sorry, that made me cringe too) you have to treat your social profiles as such.

People are so quick to point their fingers and blame bloggers for perpetuating a certain image, but then would they be so quick to point the blame at magazines? Having been in the firing line for years for giving unrealistic expectations, I’d argue not quite so much. We’re all now predisposed to take what we see on their pages as being fake because that’s what our Media Studies GCSE taught us. The conversation on air bushing in magazines and editorials has gone quiet as all of the voices have turned their criticism towards social media instead. Bloggers rose in popularity and fame (or infamy, if you’re that way inclined) for being ‘real’, therefore it puts us right in the firing line for when we’re producing content which seems too perfect, too constructed.

It all boils down to expectations, and understanding. Bloggers have proven to be more than just a flash in the pan in the fashion industry, but they still haven’t been around for long enough for readers to be certain about exactly what they do in the scope of sharing an image of reality/fantasy. Most people realise magazines are airbrushed for an uber-glossy finish, whilst bloggers are still viewed as normal people – which puts us in direct line of critics. The question we need to ask ourselves: does our audiences really understand that what they are seeing is not completely real?

Underpinning the problem with Instagram aesthetics, themes, and constructed images is that as humans, we like things that look good – vague as that is. We all appreciate Leonardo DiCaprio. Jamie Dornan. Tom Hiddleston. Beyonce. Why? Because they look good (and their talent helps too.) Looking at them makes us feel good (and then maybe a little bit bad because we don’t look like them/ are not in a polygamous relationship with all of them simultaneously.) But it all goes the same for Instagram… we like pictures on social that look good. It makes us feel something – be it that gaspy sense of inspiration, excitement, lust, desire, jealousy or joy. We all know by now the story of Stina Sanders who lost 5000 followers on Instagram for posting ‘real’ pictures as opposed to the perfect-looking images she used to. Does this not say something about what followers want to see? It’s a beast we’re guilty of feeding. But would our followers like the images quite as much if they knew how much construction went into them? I have my doubts. It leaves those in the creativity hot-seat caught in the crossfire of giving people the images they like, but getting backlash for perpetuating a vision of reality that doesn’t exist.

The crux of the problem lies not with the dishonesty of it, but the lack of ingenuity in the creation of photographs. We replicate what we see as successful, or what appeals to us. There are a lot of clichés going on out there (many, of which I am totally guilty of) and certain images are beginning to feel a little tired. Much like the blogosphere being choked with clickbait articles, Instagram is becoming much the same in terms of copycat images. But that should just be a catalyst for trying out new kinds of image making, pushing our own personal boundaries of creativity that seeks to inspire others rather than piss them off. There are lines that shouldn’t be crossed – like overly editing our bodies to look slimmer etc – that could result in an image that is harmful to to others perceptions on body image. It’s all about finding the balance between creativity and commercialism, reality and fantasy.

Hey. Remember me? I used to write sassy blog posts about #relatable shit that mattered, with a bit of style inspo thrown in for good…

The end of the year often leaves me stewing in a pot of reflective doom. You’re still stuck in a festive coma, feeling a bit too…

I really struggled with the terminology to use in the title of this post. Of course, by “potential dates” I’m referring to men that you…